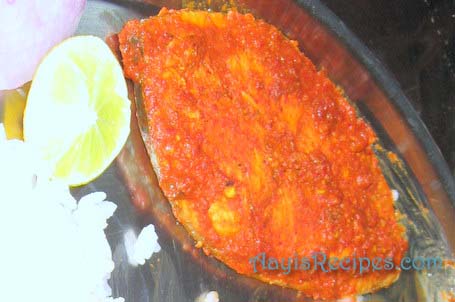 Shilpa:Â Here is one of the most awaited recipes from my brother. He and my SIL took these pictures and wrote the post. Here is the recipe in their own words.

Since my visit to Bangalore, the most adored type of fish fry has been masala fry. I tasted it for the first time at a very small restaurant called ‘Kinara’ on Modi hospital road in Bangalore. Though all of my friends were teetotallers, this bar and restaurant always attracted us for its very resonable ‘numbers on right hand side of its menu’. My initial understanding was that this preparation was Kinara’s brainchild. However as I started exploring restaurants of Bangalore, I realized that this preparation is available in most of the Mangalore style restaurants.

Though it was always easy to guess ingredients of this meticulously prepared dish, we could not exactly guess the way it was prepared. It has been nearly 10 years in Bangalore and to whomever I introduced this dish, they have always liked it. This preparation was most of the times served on plintain leaf with thick red coloured spicy paste applied to fish. This gave a wrong direction to our thought process and we tried to prepare it with plantain leaf wrapped, fish being masala cladded.

When we bought microwave we gave a try but in vain. Over last few years, I even enquired at couple of places regarding how without applying rava or without keeping it in oven or in tandoor we can prepare this. My experiments came to happy end when one of the restaurants employee told me this most wanted method of preparing.

That weekend we bought 6 slices of seer fish after buying a special tava to prepare this much ‘haunted’ masala fry. We fried two slices per meal, method being exactly same and changing the masala every time.

Below are three varieties of masala. The proportions are suitable for one large slice of seer fish. 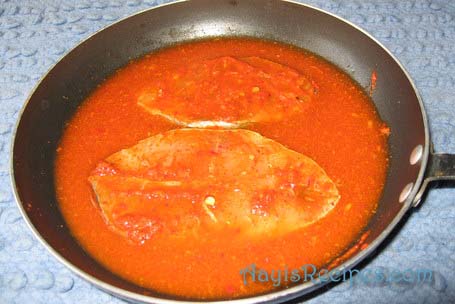 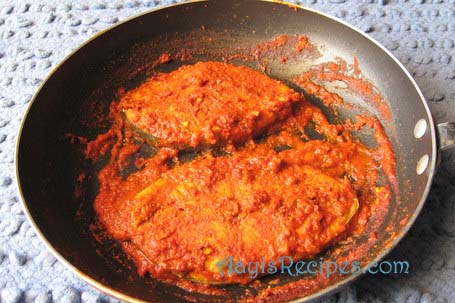 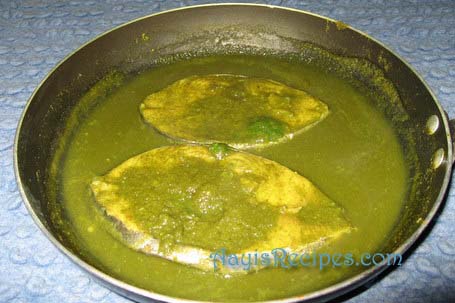 Above masala is similar as the one used in Goan Cafreal. It is same as used in Green masala fry.

Method:
Apply paste to fish and leave it about 30 minutes for marination. ThenÂ pour water to immerse the fish in such a way that at least 1/4 inch ofÂ paste should rest on fish. This will work well only with kadai shapedÂ thick bottom tava. If a mixer is used for preparing masala, use theÂ water from that mixer to immerse fish. Water should not be added
during marination. Use high flame initially and low flame to cook till water content evaporatesÂ to leave thick paste on fish. There is no need to turn the fish and noÂ need to use oil unlike conventional shallow fry. The main skillÂ involved here is in preparing the paste with adequate amount of water.

The procedure and eventual taste differs from its ‘cousins’ Â like ravaÂ fry, deep fry or tandoori fry. The hardness which comes to fish due toÂ cooking is the indication of completion, remaining paste needs to beÂ left as it is. If required couple of drops of oil may be added and itÂ can be served wrapped in plantain leaf to get distinct flavor.