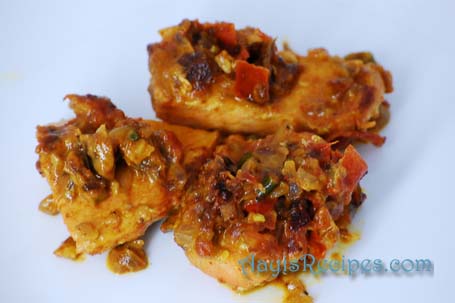 This recipe is sent to me by Sheetal. Before any of the people who know this dish bash me for picture of entirely different dish than the authentic “Caldinha” , I request to read my introduction.

Some background of Caldinha in Sheetal’s words – “There is a Goan fish curry which is mostly made by Christians as it is something that came from Portuguese influence. It is called Fish Caldinha pronounced Kaldeen. I had never tasted it in GOA but I learnt it from my Mother-in-law specifically as the Atlantic fishes like Sea Bream or Salmon taste very nice in this gravy. What I like about it is its simplicity. This curry goes very well with these Atlantic fishes as the Atlantic fish are sweet in nature”.

I read the recipe and for some reason, I wanted to try it when I bought the salmon the following week. Even though Sheetal had mentioned it was a gravy dish(which I had overlooked), I interpreted it as a dry side dish. Since I wanted to cook it immediately, instead of clarifying my doubt with her, I just went ahead and tried it. We both absolutely loved the dish. Then the next day I asked Sheetal for clarification. She sent me the pictures of the dish which I have posted below.

I thought I would try it again and then post it here. But because of the “tomato disease” here in US and also some other health issues, I have stopped buying tomatoes. So I decided to post this anyway with whatever pictures I had so that I can refer to the post when I need in future.

Method:
Apply sea salt to the fish pieces and keep it aside for 15-20mins.
Heat oil and fry onion till they are translucent. Add garlic, green chillies, cinnamon(whole or powder) and fry for a min. Add cumin powder, turmeric, tomato. Fry for a minute and then add the fish. Add a little water, just enough to cook the fish. Add coconut milk(if using) and cook till fish is done. (I just cooked it till all the water was absorbed and fish was done).

PS: Adjust the ingredient quantity depending on whether you are making gravy or dry dish.