Wish you all a very happy republic day.

“Ohh..today is April 10th, so your exam results must be out. Did you pass? Where are the pedas?” this was a general question for us when we were in primary schools (1st to 7th standard/grade is called primary school in India, I have no idea what it is called in other countries). It was a kind of tradition for us to distribute pedas among neighbors/relatives when we got the results. Not any pedas, it had to be home made smooth, delicious milk pedas. I specifically remember this because I would actually pester aayi to make pedas for me, so that I could give to my favorite neighbors.

I never understood whats the deal with happiness and pedas. I guess it all started from the fact that milk and sugar are the basic components found in any Indian home. I remember aayi would make them in big bulk. They were always the beautiful creamy color and had melt-in-the-mouth-delicious taste.

So, recently when I was talking to aayi, she reminded me about these pedas. I got all excited about it. Even though she told me to use khoya/khova to make my life easy, I disagreed. I said, I will atleast make it once from scratch. She said it has to be made on a very low heat and takes a very long time.

When she said long time, I thought may be she is talking about 1hr or so, and I thought I can handle it easily. So I started making the pedas on one beautiful evening. I started with 4 cups of milk. I kept it on a medium heat and once in a while gave it good stir. As usual, I was multitasking – doing a thousand things with this. After 1 hr, the milk looked almost the same volume (it must have reduced about 1/2 inch or so, but not at all noticeable at that time). After 2 hrs, it had reduced a bit and the color had started turning slightly red. I knew something went wrong there because aayi’s pedas never had a red color. Along with reducing milk, my patience was also reducing. After 2 and 1/2 hrs, I added sugar and kept on mixing. It still didn’t have any signs of becoming hard. I knew that it had to be cooked till some white edges show up. I stirred and stirred and stirred till it got almost dry. Then I decided its time to take it off the heat. I took it on a plate and tried giving them nice shape. By then, they had already become hard and so red that I was sure if I heated them more, they would completely burn. V, who was looking at me, said, I should make it like pedas and not small balls. (May be it was his lucky day, I didn’t throw a fit at him for saying that).

After that incident I swore that it was my first and last attempt at making pedas. I promptly declared to aayi that she had given me a wrong recipe and how could she do that. I also told her that I have joined “I hate peda” group. Poor aayi, I never imagined she would have felt bad about it. For next two weeks, everyday when I talked to her, she told me how sad she was for all my effort at making pedas didn’t bear fruit. I didn’t take it seriously for 2-3days, but then it got into my little brain that she was infact really sad about it. Not because I wasted 4 cups of milk or because of my oath of not trying it again, but because she knew how much difficult it was to make them and she thought I must be really upset about it. So I assured her that I will try it again some time and this time no matter what, I will make sure it comes out right. She gave me few more tips this time. She said if I want to get them light in color, I should continuously stir the milk and also should make it on a real low heat.

So last week, on a Saturday morning, when we had lost internet and TV connection and having a heavy snowfall, I decided to make this again (well, I needed something to kill the time). I started at 8 AM. This time I kept the heat on medium-low. I kept a continuous watch on it. For the first hour, I stirred the milk once in every 3-5 mins. Then I started mixing continuously. After 15mins, I was exhausted, so pulled a chair near the stove. That didn’t work out very well, because the stove level is higher than the chair, so I had keep my hand in raised position.

Then like a lightening it flashed… ‘Aayi sits on the kitchen counter(or platform as we called it) to make it easier. Grandma used to keep her stove on the flour and sit with her legs stretched’. Ahh..that was the best position, with your hands at a higher level than the stove. There is no way I could take the stove out from the cabinet, so I followed aayi’s method. That was so cool. Next 3 hrs, I didn’t budge from that position. I even refused to take any calls from India(usually Saturdays we call friends or family). V promptly told them all that I was not going to talk to any of them that day. (well, he must be very happy to enjoy 3-4 hrs of silence at home. After about 2 hrs I realized he was totally immersed in his favorite hobby of browsing without a constant nagging from me, he had not even told me internet connection was back. Anyway…). I got so bored, so I took my laptop in left hand, while continuously stirring the milk with right (V was pretty sure I would either burn the laptop or break it into pieces that day). Well..I have bored you all enough..it was a happy ending story – I had made perfect beautiful pedas :). I was ecstatic, never been so happy for any other dish. Don’t call me crazy if I say I had made 15 pedas in the end. Not very tempting considering it took 4 hrs of hard work and 4 cups of milk. But V was more than happy, he got 4 hrs of lonely time with his laptop, he got to see a break dance(??) after the success and also got to eat delicious pedas.

Moral of the story – “Sabar ka phal meetha hota hai” – The fruit of patience is always sweet. Attempt this only when you have a very high patience. On a scale of 1 to 10, 1 being the lowest patience you have, the amount of patience required for this is about 15.

Be ready to throw it out if it goes wrong, it only comes right with trial and error. If you are angry on someone and you think few hours of silence will calm you down, attempt this :). Do not blame me if you don’t get it right, there is nothing wrong with the recipe, when you remove it from the flame – is the decision maker. If you remove it little early, it does not get hard enough. In that case, you can heat it again and try to give it a shape again. If you take it too late, it becomes hard like rock, so to be safe, better to take it early.

All jokes apart, if you want to make your life easier, use khoya/khova to make this. I think condensed milk also should work fine in this. You can make it little by little, cook the milk for about an hour. Then refrigerate and continue next day, aayi takes sufficient breaks like this to make it easier.

There are other modern ways of doing it – like microwave pedas. I haven’t tried any of these.

Hats off to aayi who would make them very frequently and in very big batches. I am not sure I would reach there any time. As I said, making them in this color is not a small thing and her pedas always had this color.

In the pictures, you can see some cracks on the pedas. Thats the next thing I will work on. I should have taken it out a tad bit early. 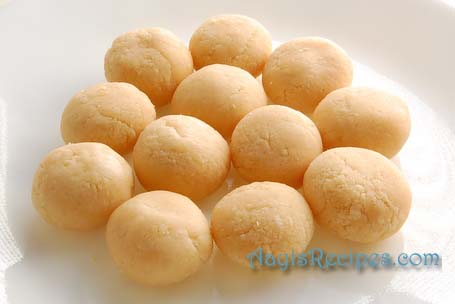 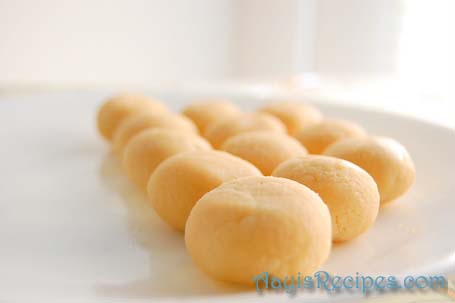 PS: Use whole milk for a better result.
Use thick bottomed pans for reducing milk, since milk sticks to bottom very easily. A wide bottomed pan saves a lot of time.
If you have a large quantity of milk, you can keep the heat on medium initially for about hour or so and keep stirring frequently.
Some people add some dry fruits or saffron/food color to give extra flavor/color to it. I prefer the pure one, so I haven’t used any.