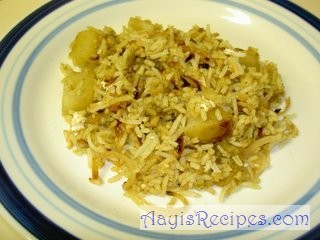 2-3 years back I did not know the difference between biryani and pulav. I thought biryani has a different masala called “biryani masala”, but the method for both are same. We were in San Diego for a small business trip and one of my colleagues always prepared biryani on the similar lines as pulav. It definitely tasted great. But then, our manager (who is a Gujrathi but settled here in US), always said ‘what you people make cannot be called biryani’. I never got any chance to see how he makes biryani. But when I returned to India, I went to Belgaum and made sure to learn the biryani from my Pachi’s cook. Her biryani is just amazing.

Here I’ve noted down tips and tricks on “How to make Biryani / Biriyani”, detailed description and step by step pictures/photos with instructions.

As I said earlier, biryanis have 2 or more than two layers of meat/vegetables and rice. But I have noticed that, the biryani cooked in Belgaum has only one layer of raw meat/vegetable at the bottom. Then there are layers of rice topped with biryani masala, fried onion. This may be what they followed from generations, but I absolutely love this. It is possible that to cook the meat fast and evenly they put only one layer so that the rice gives the desired weight to cook it faster(thats just a guess).

Here I give some general steps of making biryanis. I will not give any recipe, because these steps are useful with any biryani recipe.

– Cook basmathi rice with water, salt and 2 drops of oil till rice is 3/4th done. A few whole spices are usually added while cooking the rice. Note that rice should NOT be completely cooked. Drain water from the rice and if required, run it through cold water to separate the grains. 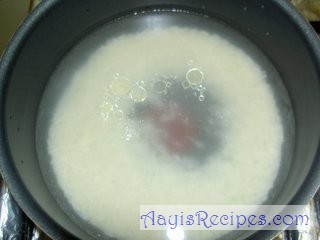 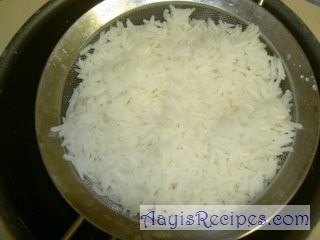 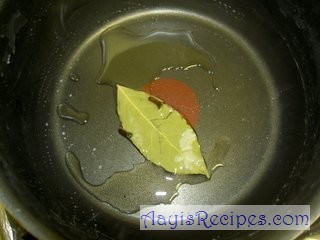 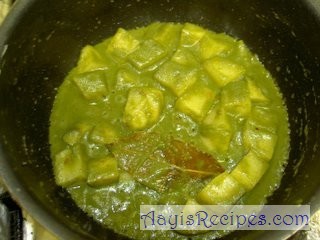 – Heat oil and fry onion slices till they turn brownish. Take out the onion from the oil on a paper towel. 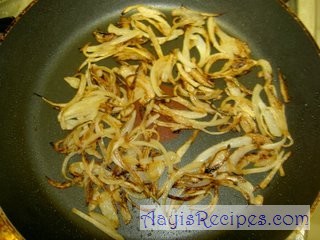 – Soak saffron or the biryani color in warm water.

– Divide the meat/vegetable mixture in 2 or more portions. Divide the rice in same number of portions. 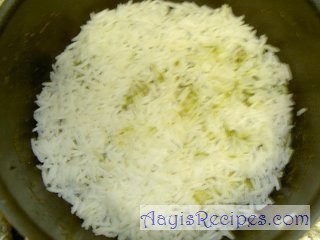 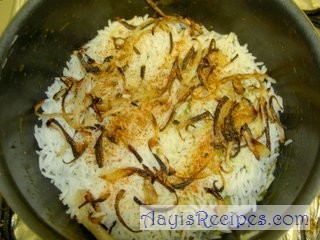 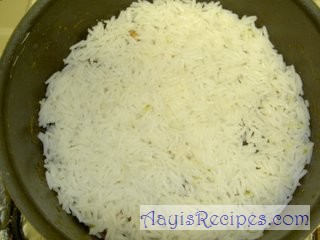 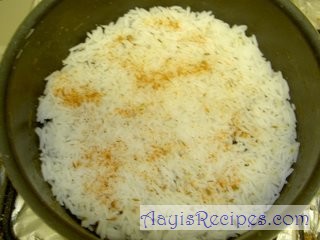 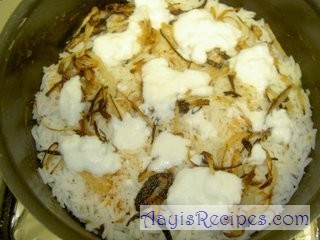 – Add some(around 1tbl spn) ghee/oil on top, add 1 cup of water(for 1 cup rice). Cover well and cook on a very low flame. After some time, when the grains have almost cooked (the grains would have become bigger). Heat a tava and keep the biryani vessel on the tava. Cook on a low flame again till the meat/vegetable and rice is completely done (if required, add only a little water, too much water makes the biryani mushy). 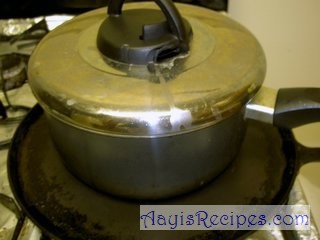 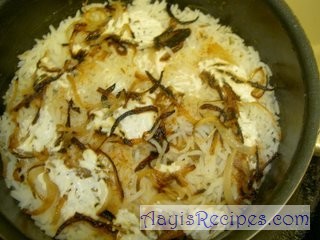 PS : Do not try making biryani in a hurry. It comes out great when it is cooked on a low flame for a long time.
Do not use cooker for making biryanis.
In the above pictures, I have spread some biryani masala along with fried onions and have not used the color. I used the extra masala for the extra flavor.
The two recipes where you can follow this method are this and this.

33 thoughts on “How to make Biryani / Biriyani”