Many readers who read crab recipes here, asked me to explain how I clean crabs. This is an account of how I do it.

I checked in few of American grocery stores. They had the ‘snow crabs’, which were too big compared to what we get in India. I am not sure how they are cooked. Then in the Chinese shop, I found two different kinds, one was ‘Dungeness crabs’, which were again big compared to Indian crabs and were red in color. The crabs which I bought were ‘Blue crabs’ which more or less looked like when we get in our native.

I could find the live crabs there. Since they had the two big legs (not the walking ones) I was a bit worried to clean them when alive (They are the most dangerous ones in the crab. The 10 walking legs are relatively very less harmful. At our native, the two big legs are usually removed and given seperately by the person who catches the crabs). So I kept the crabs in freezer for 2 hrs and then cleaned them.
Here are the step by step pictures.
Always hold the crab like this (when they are alive). If you try to hold in any other way, they can easily bite your hand :). 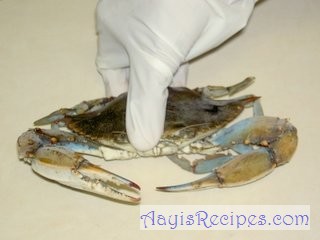 Still keeping it pressed to ground, pluck the legs. 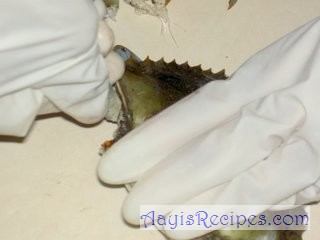 If the crabs are not alive, hold them like this, to make the cleaning process easier. 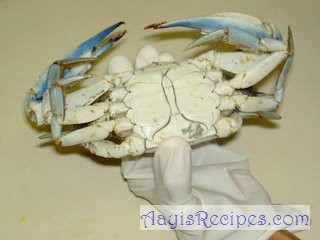 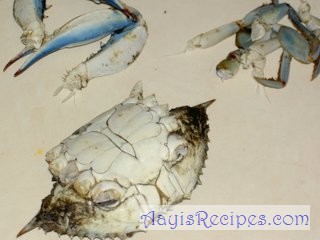 Now, the most difficult part of the cleaning, cleaning of the stomach portion. To make this easier, first remove the flap like thing in the back side of the crab. For that, first the flap has to be loosened. So, hold the crab in the following way, and hit it to some hard edges to slightly break it. (In the blue crabs, it came out easily without any force applied). 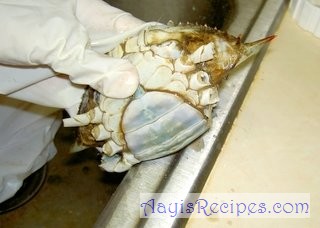 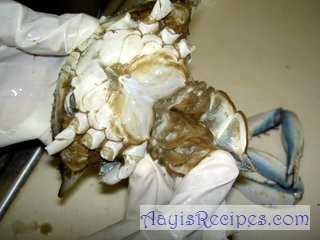 Hold it with flap opened and hit the hard shell to a hard surface to just crack the outer shell as in the following pictures. 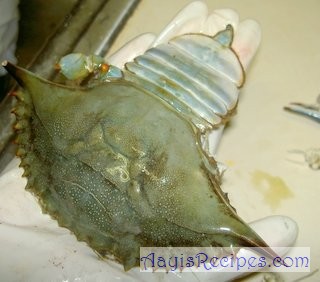 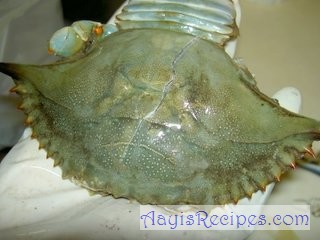 Now, hold the down portion firmly with the left hand, and lift the top portion with right hand (this requires a bit of force, first time it might look a bit difficult). 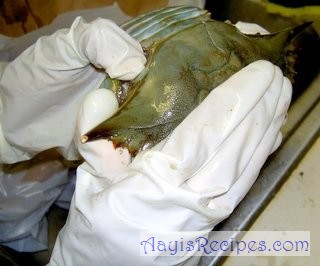 When the shell is opened, it looks like this. 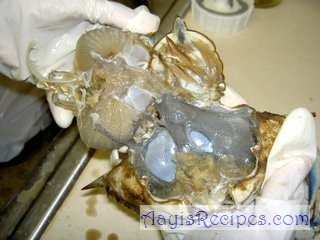 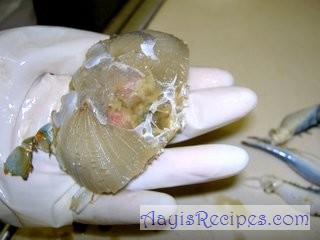 Clean the soft portion (it looks like lungs, I am not sure though) and all the yellowish portion (some people use the yello thing in the gravy which gives thickness to the gravy. But I never use it. 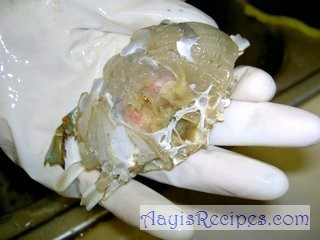 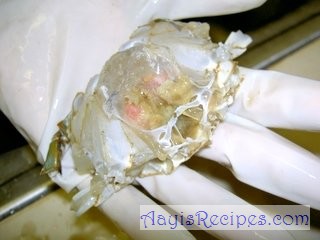 After cleaning, it looks like this. Hold the crab below running water to remove any other unwanted dirt from crab. 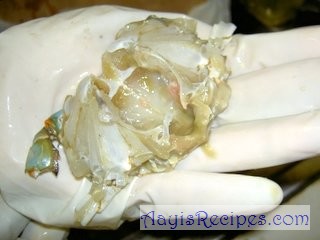 Now your crab is ready for using.
My mom makes two pieces from the stomach to make eating easier (only for bigger crabs). For this, hold the cleaned crab like this and twist the right hand in clockwise and left hand in anti-clockwise direction. 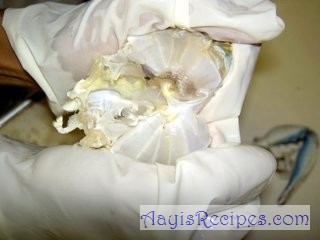 Clean the crab once again thoroughly before using.
She also slightly crushs the legs with pestle(beat it just once or twice just to crack the outer shell slightly) to make the eating easier.
Make the Crab gravy / Kurle ambat and enjoy :). (One strange thing I noticed was, the blue legs turned to red after cooking!!!)
I hope after reading this, you can clean the crabs on your own. For any further doubts, leave a comment here and I will be happy to answer them.

40 thoughts on “How to Clean Crabs”