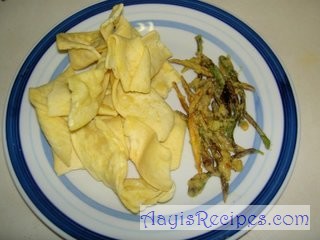 Today is the auspicious day of â€œNoolu hunnimeâ€ or â€œSuta punavâ€ (thread is called â€˜nooluâ€™ in Kannada and â€˜sutâ€™ in Konkani. Hunnime/punav is full moon day). The thread referred is the scared thread(Yajnopaveetam). So this day, Brahmins discard the old sacred thread and then wear a new one after doing pooja. So at my native, one guy from each Konkani house goto the â€˜Veer Vithal templeâ€™ and do the pooja to sacred threads. Then the guys at home wear the threads after doing the Sandhyavandan (A daily ritual done by Brahmins).

The other famous festival celebrated throughout India today is â€˜Raksha Bandhanâ€™. Sisters tie rakhi to their brothers and in turn brothers assure them to protect from all the evils. As an assurance, brothers give gifts to sisters. But these days, the gifts have taken out all the meaning of rakhi and sisters invariably ask for a gift :D.

Since it is Raksha bandhan today, I thought of posting my brotherâ€™s favorite snack. He is a food lover and likes to try different types of food. When I was thinking what I could post here today, this recipe immediately came to my mind. Whenever I see a packet of â€˜papdiâ€™ in Indian stores, it reminds me of my brother. When he was in school, he used to pester my mom a lot to make the mirchi for him. One day, mom was taking an afternoon nap, and anna (I call him as anna meaning elder brother) wanted to have mirchi, instead of waiting for mom to get up, he tried making his own mirchi. Wellâ€¦he had spoiled it up because he didnâ€™t know what the ingredients were, but still he ate it all saying it was great but didnâ€™t taste like aayiâ€™s mirsang (mirsang â€“green chilli).

Anybody who has studied or lived in Belgaum, know about this dish. This is widely available in all chat shops. So when anna went to Belgaum for his engineering, he used to eat this papdi-mirchi a lot. (He never took me to that shop :(. I came to know about this from my cousin who was also upset with anna for not taking him to eat this dish).

Papdi is available easily in Indian stores. This is made of besan(chick pea flour), but I have no idea how they make it. So for time being I am happy to buy it ready made. The mirchi is prepared as follows

Fry for 2-3 min till the chilies become slightly brownish. 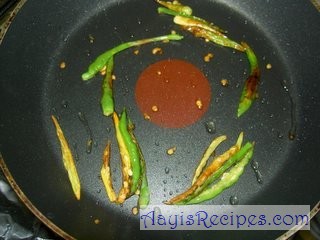 Now add salt and besan and mix well (so that there is a coating of besan on the chilies). Fry for a min and remove from flame.

How to eat?
Take 3-4 papdis and one chili at a time and eat. Be aware if the chilies are too hot (hot chilies with the bland papdis make a great combination).