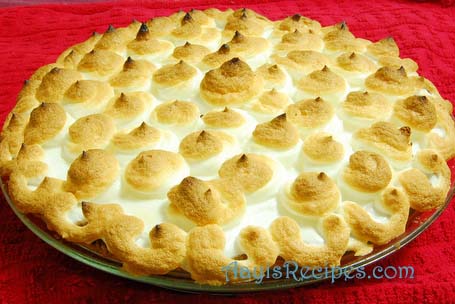 Yay!!! I am a member of Daring Baker’s group now, those who don’t know about Daring baker’s challenge, please read this.

For last many months, I have been drooling over Meeta’s gorgeous entries for this challenge month after month. I still don’t know how she manages to make them look so beautiful. I was just enjoying her pictures for so long and then one day, they came up with bread challenge. Then I baked the stuffed buns at home. Thats when I thought I had to seriously consider joining this group, not because I am a daring baker yet, but I would love to become a daring baker. Since I have baked many cakes so far and have kind of basic idea, I thought its the most suitable time.

So I mailed Lis and Ivonne asking if I could join. I was very surprised at their prompt reply, they asked me to join from January. So finally here I am with my first challenge. There will be a challenge every month & on the date specified, I am supposed to post about that challenge. I am hoping that I can keep up with this (did I say I am very bad at planning?).

This month’s challenge was Lemon Meringue Pie. Jen from Canadian baker challenged us to bake this beautiful pie. The first time I saw it, I thought it was a very simple challenge compared to what DBs have been baking so far.

When I told Meeta I joined DB, she offered to help me if I needed anything. She also said she had baked the pie. This was some 2 weeks ago. Since the post date was 28th, I was taking it cool. But after I came to know she had already baked it, some warning bells started ringing in my head. Considering I mess up everything when I am in hurry, I decided to bake it immediately. I wanted to keep some room for correction.

So I started with LMP on a weekday again (when will I ever learn not to try anything on weekdays? ufff..). I successfully made the crust and then I realized I didn’t have cornstarch. Why I didn’t think about that before?, because I thought corn flour could be a substitute for cornstarch. The corn flour I had was yellowish in color and when I googled, I came to know cornstarch is white in color. I didn’t want to take a chance. So I ran to grocery store to buy it. That took some time, so I started feeling the pressure, it was already late and I was not sure if I could take any breaks in between.

According to me, the most difficult part of this LMP was making the meringue. I have a hand blender. So it took a very long time to beat the meringue to correct consistency. The blender started getting hot and I was a bit worried that it might blow up on me. Finally I gave up after some time. So when I started decorating, the meringue was not holding it’s shape. Anyway, I continued as it is.

I feel the pie came out fine. It was holding its shape properly. I have to still work on the crust. I could not give a nice shape to it due to lack of time. I think I rolled it a bit too thick. I should take care of it next time. So when I refrigerated the remaining pie(Jen had mentioned that we have to finish the pie within 6 hours, but the quantity was too huge for us, so I had to refrigerate it), the crust became very hard. The pie was a bit too lemony for our taste even though I reduced the amount of lemon juice in filling. I think next time I will still reduce the amount.

The funniest thing was, since I have never used cream of tartar, I didn’t know how it looked like. So I started searching for it in baking isle of supermarket. After spending about 15mins, I asked for some help. The lady told me it is a white colored powder and available with other spices. (Yeah, I could have saved that time if I had used google, stupid me).

Pardon me for my not-so-good pictures. I was so tired at the end, I could not take any good ones. I didn’t check the pictures for few days and till then the pie was over. So I decided to post whatever I had. I will try my best to do a better job next time. Since 28th is a extremely busy day at office, I am posting this on 27th mid night. Its already past 11:30 here and I saw many posts of LMP on other blogs, I decided to post mine too. 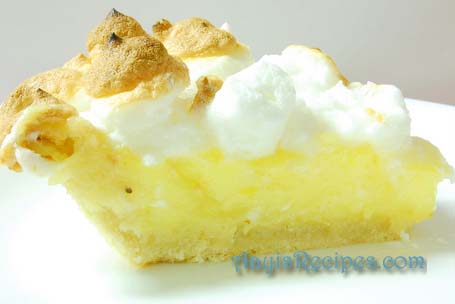 These are the exact details given by Jen and I followed every single step she mentioned. Thanks Jen.

For the Crust:
Make sure all ingredients are as cold as possible. Using a food processor or pastry cutter and a large bowl, combine the butter, flour, sugar and salt. Process or cut in until the mixture resembles coarse meal and begins to clump together. Sprinkle with water, let rest 30 seconds and then either process very briefly or cut in with about 15 strokes of the pastry cutter, just until the dough begins to stick together and come away from the sides of the bowl. Turn onto a lightly floured work surface and press together to form a disk. Wrap in plastic and chill for at least 20 minutes.

Allow the dough to warm slightly to room temperature if it is too hard to roll. On a lightly floured board (or countertop) roll the disk to a thickness of ? inch (.3 cm). Cut a circle about 2 inches (5 cm) larger than the pie plate and transfer the pastry into the plate by folding it in half or by rolling it onto the rolling pin. Turn the pastry under, leaving an edge that hangs over the plate about Â½ inch (1.2 cm). Flute decoratively. Chill for 30 minutes.

Preheat oven to 350ÂºF (180ÂºC). Line the crust with foil and fill with metal pie weights or dried beans. Bake for 20 to 25 minutes. Carefully remove the foil and continue baking for 10 to 15 minutes, until golden. Cool completely before filling.

For the Filling:
Bring the water to a boil in a large, heavy saucepan. Remove from the heat and let rest 5 minutes. Whisk the sugar and cornstarch together. Add the mixture gradually to the hot water, whisking until completely incorporated.

Return to the heat and cook over medium heat, whisking constantly until the mixture comes to a boil. The mixture will be very thick. Add about 1 cup (240 mL) of the hot mixture to the beaten egg yolks, whisking until smooth. Whisking vigorously, add the warmed yolks to the pot and continue cooking, stirring constantly, until mixture comes to a boil. Remove from the heat and stir in butter until incorporated. Add the lemon juice, zest and vanilla, stirring until combined. (At this stage the filling had become quite thick). Pour into the prepared crust. Cover with plastic wrap to prevent a skin from forming on the surface, and cool to room temperature.

For the Meringue:
Preheat the oven to 375ÂºF (190ÂºC). Using an electric mixer beat the egg whites with the cream of tartar, salt and vanilla extract until soft peaks form. Add the sugar gradually, beating until it forms stiff, glossy peaks(This takes a real long time, so do not loose patience). Pile onto the cooled pie, bringing the meringue all the way over to the edge of the crust to seal it completely. Bake for 15 to 20 minutes, or until golden. Cool on a rack. Serve within 6 hours to avoid a soggy crust.