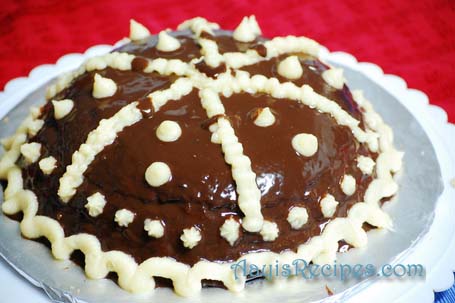 It’s time for Daring baker’s challenge again. When I saw this month’s challenge, I was very disappointed. It looked very similar to the Opera cake that we made couple of months ago. Many other DBs had the same concern. But one thing that made me try this was the chocolate. I am not a chocoholic, but I love chocolate pastries/cakes.

Its proven again that when I am not fully interested in something, I just mess it up. From my work front, I had lot of stress going on this month. I just could not find any free time. But somehow through all the madness, I wanted to squeeze in time for this cake. As I have said earlier, all you need for DB challenges is patience and a LOT of time, both of which I did not have.Â  So I just messed up the cake :(.

I started working on the cake on a Friday. I thought of just making the Genoise that day and remaining things the next day. I did not want to buy hazelnuts which are suggested in the recipe as they are very expensive and I did not know where to look for them. So I thought of using almonds (I had a big batch which I wanted to finish off). I had to beat the egg whites till they formed soft peaks – since it does not have baking soda/powder, this helps in making the cake soft. Since I wanted to rush it off, I thought of “beating the eggs” in a mixer!!!!. How can I be so dumb? That was a blunder and I knew the cake is messed up. I should have atleast taken a back step there and used a new batch of eggs. But I didn’t have any more in the refrigerator and I did not want to go shopping. So there, you know the fate of my cake. I just hoped somehow miraculously, everything would work out. But it did not. The cake did not rise at all. I did not have materials or patience to make it again, so I thought of using the same cake.Â  1 and 1/2 cups of nuts and 7 eggs, I had no intention of throwing everything. I thought – after I layer it with buttercream and chocolate, it would come out well. 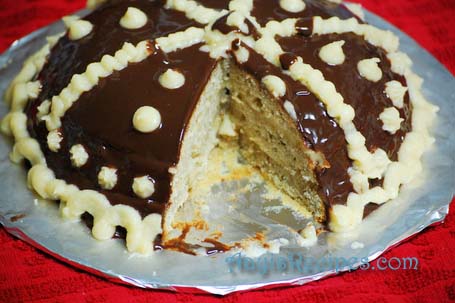 I don’t have a food processor with me and I don’t want to buy one now. So that was one of the biggest hurdles for me.Â  Next day when I was making praline, I thought my mixer might just blow up because of all the weight, I was lucky, nothing like that happened. But I could not grind the nuts to a fine powder. So the final buttercream was not so fine in texture. The nuts started blocking the piping tips and it was a mess to decorate the cake. The buttercream was a bit soft because I did not refrigerate after mixing the praline. The whole process of making buttercream and arranging the cake took way too much time. So I stopped caring about the look and just wanted to finish off the work and also clean up a big mess in the kitchen.

Even after all this, the cake was very very tasty but it was still hard. I thought it looked pretty good, not bad for all the disasters I had. I think I am going to try this buttercream again sometime. It is just out of this world. I haven’t used any alcohol in the cake. I am sure it makes a big difference. I am going to make this cake again sometime (but first I have to figure out replacement for all those eggs!!!). 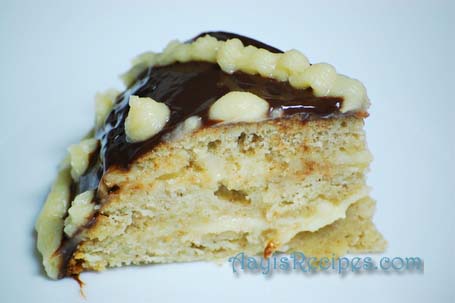