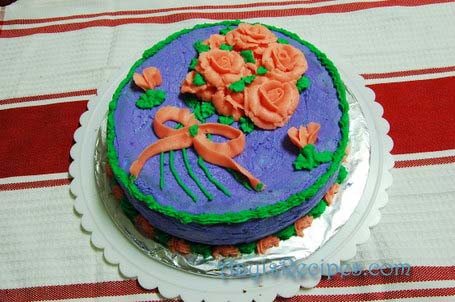 This Thursday was the last class of course-1, it was basically a practice of making roses. I was very excited as well as sad that day, since the classes for course-1 got over. I enrolled for the course-2 which starts in April first week.

Now coming to the last cake; this week was one of the most pressurized weeks at my office. There were some unexpected problems in the project and I was really stressed, more than that I was suffering from an eye infection. So Wednesday when it was time to bake and ice the cake, I was totally exhausted. In any case, I didn’t want to miss this class, so I came home a bit early from office on Wenesday. I got this great idea of baking some different cake this time. So I followed a dark chocolate cake recipe from one of the cookbooks that I had. The cake turned out to be a total disaster – my first spoiled cake. First of all, it had become dark from outside, it was not baked from inside and it had sunk in the center. It was already late and I had no mood to bake it again. So I thought of using the same cake for my class.

Now the problem was, which color to use for icing so that the black color was not visible. I didn’t want a chocolaty icing because I didn’t want to put roses on chocolate icing. So I thought of using a very dark color for icing. It demanded almost 4 times more icing than what normally would have taken, to cover up the sunken center. I could not make it very smooth because of shortage of time. Finally when I took it to class on Thursday, I was ashamed to show it to anyone.

I somehow managed to make the roses even though my eyes were really bothering me. Everyone said I had done a good job, even though my cake looked very unprofessional. I was thinking not to post it here, but this would remind me of things not-to-do in future. So it is here.

Even after all these, I am really happy with my roses. They looked beautiful. I need a lot more practice to make perfect roses, but these were very good, may be above my expectation.