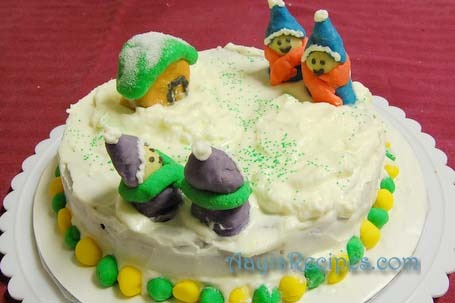 We are having a very bad snow storm here. It feels like we are in Alaska(I am exaggerating a bit). The temperatures have dropped suddenly to one digit (in Fahrenheit). So thats what I wanted to create on this cake.

My latest interest is to create marzipan. I had heard about this name before but had no idea what it was. But then I came across Deeba’s gorgeous creations here. So I wanted to give it a try. If I know something about Marzipan today, its because of Deeba. Thanks Deeba for the recipe. Day before yesterday, after postponing it for too long, I made something like a marzipan (I am saying that because I didn’t follow the method exactly). But then I was too tired to make anything with it, so I just wrapped it in a plastic wrap and kept in refrigerator. Today when I reached home, I wanted to finish that off, because I was a bit worried that it may get spoiled.

Then I saw a picture of these cute little humans with snow costumes in a “cupcake fun” book. So I decided to make them. When I started, I had great plans of how this cake would turn up. But once again I realized today that I should not attempt such things on weekdays. By the time I finished this, I was totally exhausted and it had turned out quite different than the intended cake. Whatever that is, V had a huge smile on his face when he saw the cake. So every bit of the effort was worth.

I chose the blackberry cake because I had bought these berries few days ago and they were sitting in fridge without being used. Recently aayi read somewhere about the medicinal value of different berries, so she promptly told us to eat them. As usual, I bought them, but I had no idea what to make with them. I initially wanted to go with muffins, but I had to use up the marzipan also, I thought of making a cake. The cake was very delicious.

Marzipan (This is not the actual recipe, this is what I followed. Read Deeba’s recipe for actual marzipan):
150gms (1 cup) almonds
150 gms(1 and 1/2 cups) confectioner’s sugar
1 tea spn almond extract (I used vanilla extract)
A pinch salt

Method:
Heat about 2 cups of water. When it starts boiling, add the almonds. Cook for about 1-2mins. Take off the heat and take out the almonds on a clean kitchen towel.
Peel off the skin of almonds. Grind it to a powder(Smoother the powder, better the final product). In actual recipe, it is first dried and then powdered. But I skipped the drying part.
Now add salt, sugar. Add about 2 tbl spn of water and mix into a tight dough (add water little by little).
Take out small balls of marzipan, add food color. 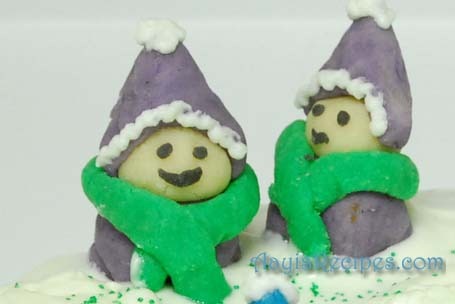 Method:
Mix all and beat at high speed till soft peaks form. 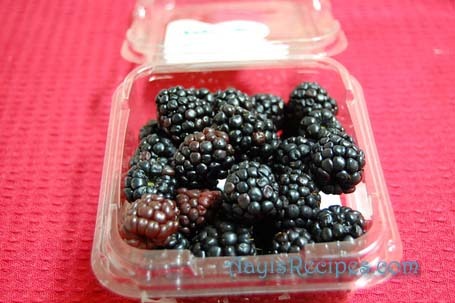 (Thanks Arjuna for the tip about cream of tartar, which helps the cream hold shape)

Method:
Preheat the oven at 350F for about 10mins.
Bring the butter to room temperature. Mix sugar. Then add egg, milk and beat well.
Now add the dry ingredients baking powder, salt and flour little at a time mixing continuously. Once everything is incorporated, add the blackberries and beat again. 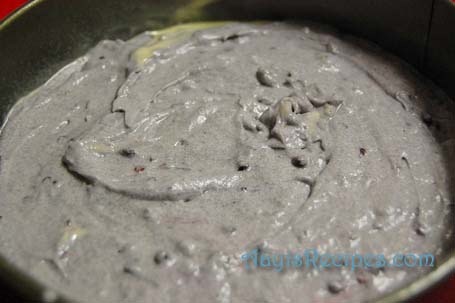 Grease a oven proof baking dish with butter. Then pour the mixture and bake in oven at 350F for about 30mins or till a fork inserted in the middle comes out clean. 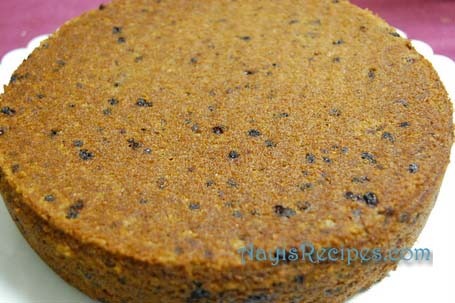 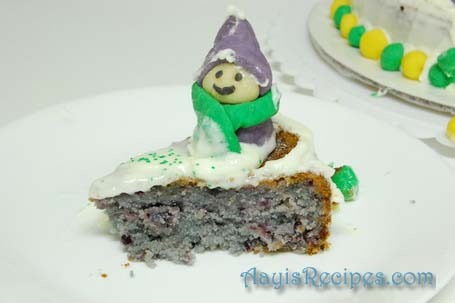 Assembling:
Spread the whipping cream on the cake. Then decorate as required. This can be served without decoration also. 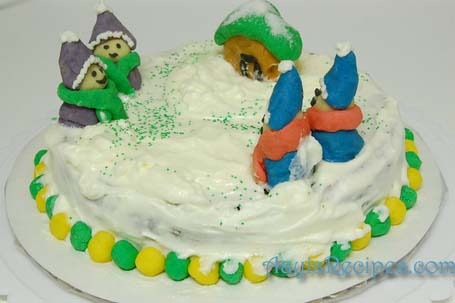