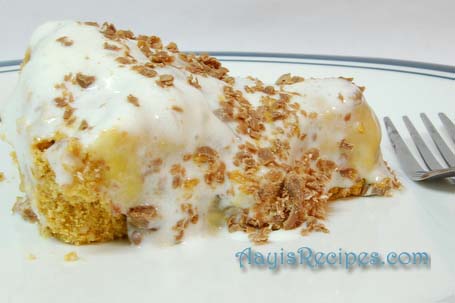 Some 1 month ago, Purnima and I were discussing something. Few of you might know what happens when two extremely talkative people start talking(or chatting). We go on and on and on for a long time till her two kids take control over her keyboard and start typing in some alien language like – sdafgqdsmcbjkrtg.

On one such day, she sent me a link to a nice pie, banana toffee pie and asked me to check it out. I glanced over it, I said, “well..it looks good”.

After one or two days she again asked me if I actually read the recipe, I said I will do it and forgot.

Then again last week she asked me if I read it and told me it is very interesting to know the method to make toffee for that pie. I started thinking, “toffee? where is the toffee? It has crust, banana, whipped cream and chocolate. What is she talking about?”, but I didn’t tell her that because I thought she might feel bad that I had still not completely read it. I told her, I will surely read it and we can talk about it. Since it had banana, I was a bit hesitant to try it.

So by now, I was very curious to know all about this pie. She also told me I can try it with some other fruit. So that was something I was ready to try. I started searching more details of this pie. A simple search in google, I got a definition

Banoffee pie is an English dessert made from bananas, cream and boiled condensed milk (or dulce de leche), either on a pastry base or one made from crumbled biscuits and butter. Its name is a portmanteau constructed from the words “banana” and “toffee”.

So, there was no way I could substitute banana in this and still get a banoffee pie. It looked very interesting and easy. So I decided to make it for a small dinner get together that we were having at our friend’s home.

According to me, this is the easiest pie one could ever make. There is no way you can mess it up. At the last moment I decided to make this, and I knew I had some Graham cracker crumbs (which is used for the pie crust) and whipped cream at home. So I asked V to buy just condensed milk. When he brought it, I started pulling out all other ingredients to make this. Soon came to know the crumbs had passed their prime time long ago, so I had to throw them out. I sent V again to buy crumbs. Made the crust, toffee, spread everything else and last moment when I was going to top it with whipped cream, I realized I had run out of that too. So I took a half done pie and on the way to our friend’s home, I bought whipped cream and topped the pie with it at his home. Luckily, V was hit by his usual chocolate love that day and had bought a big chocolate bar. So I grated that and topped the pie with it. Since I had already too many obstacles while making it, I was a bit worried about the taste.

After dinner, while cutting the pie, I realized, the cream was running around all places because it was not set properly (may be next time, I will whip it at home with cream of tartar to make it stand stiff). But whatever it was, this pie was absolutely yummy. It was a bit too sweet for us because of sweetened condensed milk, but the different layers gel together so well and make it absolutely delicious. Thanks Purnima for introducing me to a simple yet so delicious pie and thanks Aamena for posting the delicious pie.

Method:
Mix crumbs with sugar and melted butter. Press down the crumbs at the bottom of a pie pan. (I used Wilton’s Springform 8 X 2 5/8″ pan). Refrigerate it for about 1 hr.

In a big vessel, bring water to boil. Drop the condensed milk can (unopened) in water.

Close the lid and let it cook for about 2hrs. (If the the can gets exposed to air while cooking, it explodes. So make sure it is immersed in water all the time. So ideally use a very big vessel with water filled upto the top). Cook for more time to get a hard toffee which will be a bit difficult to spread. I just cooked it for 2hrs on medium heat, so it was thick but still liquid. Let it cool down.

Meanwhile, take out the pan with crumbs. Spread a thick layer of banana on it.

When the toffee is cooled, spread it on top of banana layer.

Top it with whipped cream. Sprinkle chocolate over the top. Refrigerate it for 2-3hrs and serve cold(I didn’t have much standing time here, so the cream didn’t set).