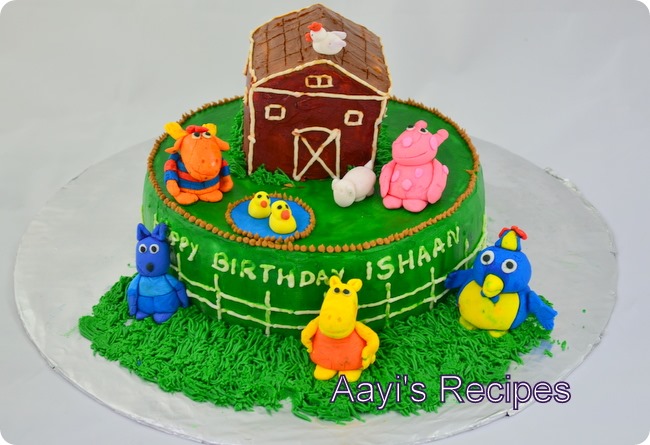 Ishaan is already 3 years old! I love this beautiful age – his imaginary stories, his own on-the-fly songs, his craze for cricket and soccer and everything that involves balls, his love for his bike etc. Unlike last two years when we had big parties for his birthday, we decided to keep it simple this time. Since he loves to have his friends, we decided to call our friends home. according to him, ALL the kids are his friends – even those that he sees in parks, playgrounds, library or anywhere else, they don’t even have to talk to him!!.Â Instead of having everyone at home once – which was not possible in our small apartment, we thought of calling them as and when possible. So it is not actually a birthday party, but just fun time for Ishaan and his friends.

We had some friends over in the last week of March, Ishaan had a blast with our friend’s 2 year old daughter. We had four families for dinner yesterday – 9 kids of ages between 2-11, they were all jumping up and down till 11PM!!. We have some more of these dinners coming up in next couple of weeks. He is on cloud 9!! 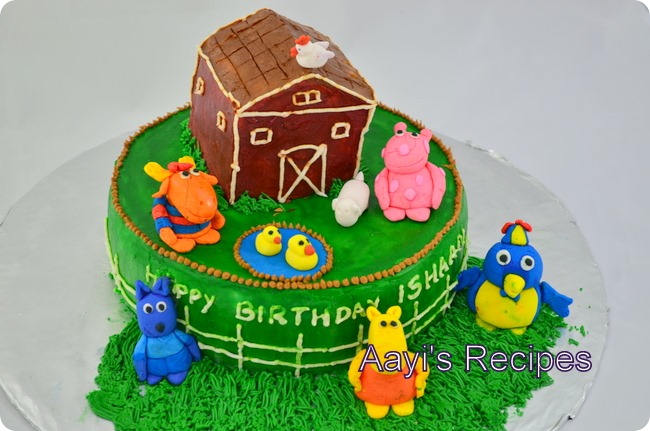 Now coming to this cake. This cake has everything he loved in last 1 year. Backyardigans is a kids show he is totally crazy about. He caught on to it around 2 and has been watching it ever since. It has 4 seasons and he has watched every episode many times. He somehow still likes to watch it and sings songs from it. When I asked him what he wants for birthday, he said he wants Plablo(the cute blue penguin’s name is Pablo and he calls him Plablo) then he said he wanted all 5 characters.

‘Old Mac Donald had a farm Ei-Ei-Oh’ is his all time favorite nursery rhyme. It must be the first ever song he sang. We have a book which has this song and he made me read that book almost every day for a long time. He sings this song loudly when he is in the car. We frequently visit Deanna Rose Children’s farmstead – which is a cute little farmstead-Â  here in Kansas. He loves to pet the goats, feed the goat babies with a bottle, go on wagon ride, riding the tiny tractors, watch milking of cows and everything else that this farmstead has to offer. He calls it Old MacDonald’s farm. Everytime we step in there, he sings ‘Old MacDonald had a farm’ very loudly. It is so funny when he stops near each animal display and sings the song. They have many animals which are not in the song – so he makes up his own song/sounds!. He gives a nice entertainment not only for me, but also many others who listen to him and start laughing :)). 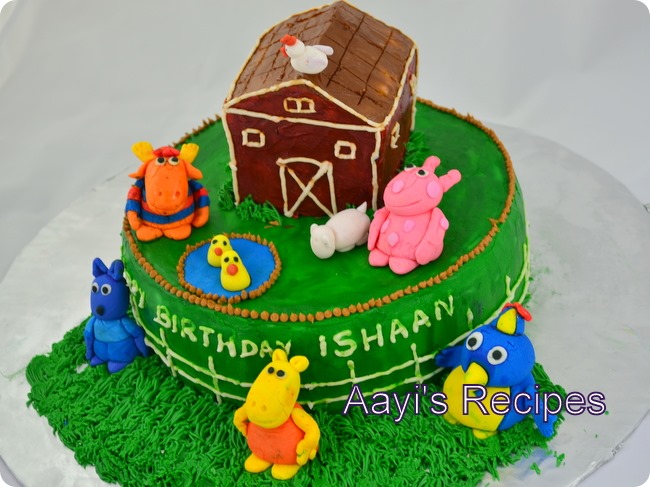 The love for the song is not limited to this farmstead. When we visited India, whenever he saw any animal on the road, he sang this song. There was one time when my dad wanted to take us to his teacher’s home. We told him it was Old MacDonad’s home, because he lived in a house surrounded by fields and had chickens and other livestock in his home. Ishaan held small chicks, fed them rice and he was very happy.

So I decided to combine these two on the cake. I explained him that on the cake, backyardigans are visiting Old MacDonald farm. I cannot explain how happy he was to see this cake. My gift was all those sloppy kisses and hugs and that cute smile. All my efforts paid off.

The cake was chocolate cake sandwiched with chocolate frosting. The cake came out perfect this time. I followed an awesome tip – covering the cake pan with a wet towel – this time to get a flat top cake. This worked as a charm. If you want to bake and decorate a cake, you should watch this video, I wish I had seen this earlier. I could have saved so many cakes!.

All the animals are made with gumpaste. I made gumpaste using this recipe. This is the first time I used gumpaste. I had lot of trouble with it and I think I need a lot of practice with it. The animals kept breaking. I don’t like the cracks on the animals or the finishing on them. I now feel I should have used fondant instead of gumpaste.

I was a bit lazy to make buttercream all these years. I always used Wilton’s ready to use buttercream or made it at home from their recipe – but it bothered me because it was made of shortening. I would rather use something that was made from butter. So this time I made buttercream at home and it gave me the best results. Here is the recipe I used.

Method:
Bring the butter to room temperature so that it is soft but not melted.
Now mix everything else to get a smooth icing. I added 4 cups first and then added another 1/2 cup when I saw it needed little more sugar.
Mix required coloring needed.

The biggest trouble I have with any cake is saving the cake. I have a cake carrier that I use to cover the cake. But if the cake is big, this cannot be used. It was not fitting properly in fridge either. So cake had lot of smudged edges.